COLLWEB is a global network of collectors that builds a community of people who appreciate the value of art, cars, watches and real estate.

“Art expresses a fundamental part of what it means to be human. It is through art that the conflicts of life can be explored, better understood, brought to the surface and put into new relationships with each other. I believe we are living in an unprecedented time of the breakdown in human relationships and interactions. This is happening from the individual and personal level to the opposite geopolitical end of the spectrum. We tend to think of interactivity in terms of technology these days rather than as human feeling and connection.

My art is meant to directly challenge this state of affairs and re-invigorate and re-inspire the emotional and spiritual dimensions of human life, which is inevitably in direct conflict with much of what we see around us in our world now. These are central question not just of what art is, but of what art does, and can or even should do. The biggest frustration has been struggling against a system that attempts to codify what sells, thereby killing creativity and individual expression. It has taken me many years to find my creative voice, and a large part of this has been a struggle against such commercial forces. They are very powerful and insidious, and institutionally dismiss or ignore what they cannot appreciate.”

Francesco Ruspoli’s work is an exploration of relational space and its changing possibilities within contemporary society. His work explores the dynamic frontier between abstraction and figuration. This fertile area keeps alive the infinite possibilities of being human in an age intent upon limiting them. There is a defiant romanticism that insists that emotions are precious, meaning is creative and that there is a world beyond commodities.

Using a strikingly vibrant palette, each painting enacts a symphonic dance of colour where subtle gradation and dramatic contrast express nuances of emotion and sensuous physicality.  Timely reminder of our embodied life with its hopes and dreams, pain and the poignancy of yearning. The eternal human dance of reaching out and holding back is thus movingly enacted.

The work expresses the direct sensation of lived experience through organic shapes and forms woven from flowing lines and the gaze of the viewer. You are invited to participate in a creative encounter with these elements, constructing your own visual languages, responses and meanings. From this aesthetic encounter, urgent questions will arise about the quality of engagement between humans and their many environments. It is hoped there also follows an increased sense of wonder at your own capacity for re-interpretation and invention that will uplift both you and the world in which you live: this is the very essence of hope.

Creativity for Ruspoli is a unique form of discovery. Like an archaeologist of his own imagination, he gently reveals hidden layers whilst discovering the essence of the image, which may origin in ancient or classical art, dance or theatre. This process involves lengthy development of ideas worked through on canvas, much like Beethoven’s constant working out, reworking and gradual refinement of his musical themes in sketches. This requires an austere Zen-like mental discipline, where he can get himself out of the way so his art can create itself.

The relational concern of his work is intended to embrace all viewers, so their interpretations are equally valid as his. The act of viewing is to enter a relationship, a mutual encounter of the painting and the viewer. This is why the figures in his work are placed so viscerally in relation to each other, and why this stimulates a reflection on relatedness which encompasses the viewer.

A vital part of interpretation is our emotional response, which incidentally is not solely the preserve of a ‘refined’ academic elite. The experience of being with others is the essence of his work, so he hopes his work is able to share that precise experience with the viewer. You could say his message, theme and vision is to co-create an experience of emotional connection, whatever it happens to be on that precise moment of that particular day, with you, here, in this space together. 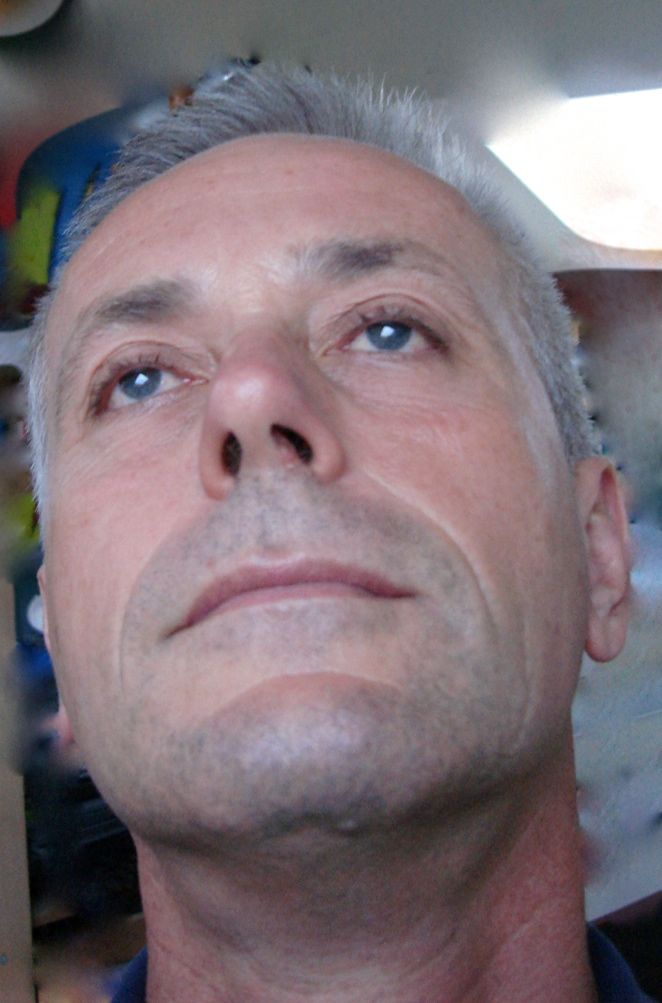